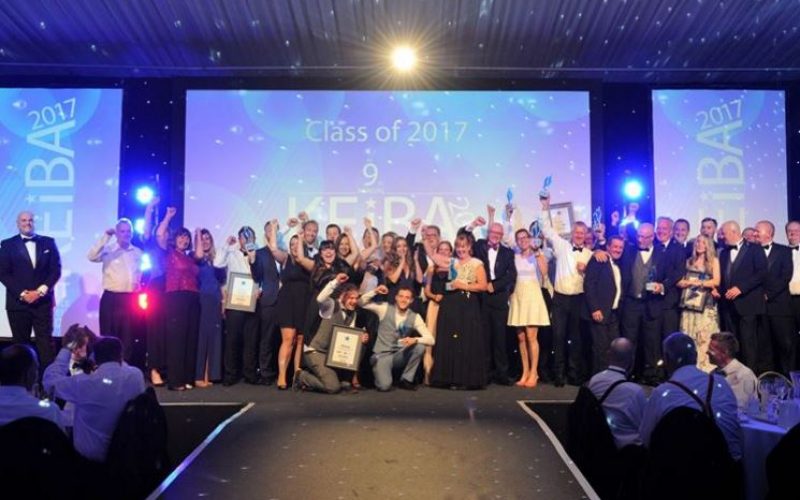 An IT support firm, a medical manufacturer and a coffee company were the big winners at KEiBA 2017.

Tunbridge Wells-based Infinity Group, which looks after computing and business telecoms for clients like Lloyds Bank and Specsavers, picked up both large business of the year and the customer service award at the most prestigious business awards in Kent.

Meanwhile, HatHats Coffee Company in Whitstable won start-up of the year and apprenticeship of the year for its fair trade philosophy and nurturing the career of its first apprentice Charlotte Thomson. In all, 17 awards were presented at the gala dinner at the Kent Event Centre in Detling on Thursday, attended by more than 600 people.

For the first time there were 16 categories to enter, with the creation of a new construction project of the year prize, won by Ashford-based Directline Structures.

In addition, the annual outstanding contribution to business in Kent award was given to Jo James, chief executive of Kent Invicta Chamber of Commerce, which supports 1,200 companies in the county. The new medium business of the year prize went to the third of the night’s double award winners – Harrietsham-based medical manufacturer Bedfont Scientific.

The company was also named exporter of the year for selling its breath analysis products in more than 70 countries, with plans to expand into North and South America, China and the Middle East.

Wrotham-based Lucas Fit Out & Finishing Specialists was the second construction firm honoured on the night, taking home the commitment to the environment award for its building innovations which reduce harmful gases in the air. The business commitment to the community award was given to FareShare Kent, a non-profit organisation in Ashford which collects food due to be thrown away by supermarkets and sends it to charities across the county.

Another company returning to pick up a prize was contract manufacturer ITL Group, which added technology business of the year to two awards collected in 2016 and another two earned in 2014.

Entrepreneur of the year went to Sleeping Giant Media chief executive Luke Quilter, another person who is no stranger to KEiBA, having seen his Folkestone-based online marketing agency win two prizes last year. Manufacturer of the year was awarded to £79 million turnover Fujifilm Speciality Ink Systems in Broadstairs, which transformed its business model with the early adoption of disruptive digital technology.

The Historic Dockyard Chatham was named tourism and leisure business of the year for its Command of the Oceans exhibition and use as a high-profile filming location.

Young entrepreneur of the year was Alexandra Auger, whose Chatham-based juice making company the Juice Executive is set to break the £1 million turnover barrier this year.

There is a picture special from the awards night in your copy of Kent Business next Thursday, free inside the Kent Messenger and Medway Messenger.

Here is the full list of winners and finalists:-

Apprenticeship of the Year sponsored by KCC Skills and Employability